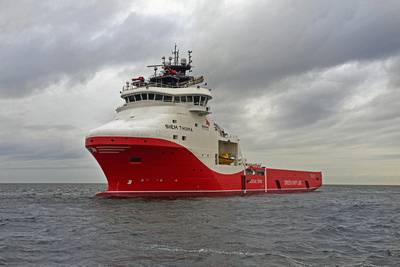 Siem Offshore has entered into a contract with a long term client in Australia for the PSVs “Siem Pilot” and “Siem Thiima”. The contract for “Siem Pilot” covers a firm period of 572 days plus options, whereas “Siem Thiima” has been awarded a 3 year firm contract plus options. Both contracts will commence during Q1 2022.

After a short spell in the North Sea spot market, the versatile “Siem Pilot” will as such be mobilized to Australia where her special features in form of towing winch and bollard pull capacities will be utilized. “SiemThiima” will continue its long standing commitment for serving the same client. The latter vessel is scheduled to install a battery power package before commencement, through the Company’s environmental commitment to upgrade all of its three high end dual fueled PSVs. “Siem Thiima” was the first dual fueled PSV contracted in the southern hemisphere in 2017, and will now again be the pioneer towards further reducing its environmental footprint being the first of ts kind with a battery power upgrade in the same hemisphere.